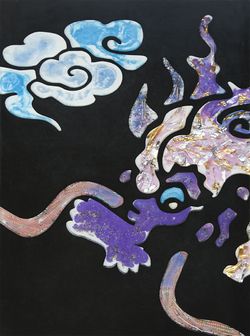 Mission Chinese Food became a client for their second iteration in New York through their then executive chef Angela Dimayuga who had been a friend of Chen Chen & Kai Williams since their days studying at Pratt Institute. They were moving into a pre-existing high end restaurant space and needed interventions to change the space to align with their identity. Minor changes like painting over some of the mahogany paneling and installing mirrors in hallways were made as well as more intensive changes.

Taking advantage of the birds eye view of the lower dining area from the first floor, a tiled graphic of a dragon spanning the entire run of the tables was applied. The tables are made from Richlite, an ultra dense paper pulp material, machined with the graphic and filled with a urethane and epoxy based inlay.

The donut design of the stool was inspired by massage chairs. The seat is upholstered in teal faux snake skin. The lower half of the donut is poplar and the legs oak, both painted silver.