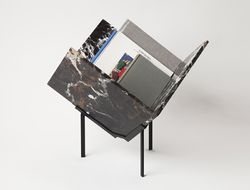 Third Eye Vessels are simple 3 sided boxes held in a steel stand so that the corner is pointing down. The shape allows gravity to assist in organizing books at 90 degrees and in chevron patterns, functioning similarly to an Irish brick hod. In production the stone pieces are adhered to one another and to the steel stand, however the lapped configuration of the stone sides is such that when the last stone is inserted into the stand the composition becomes stable without any adhesives.

Originally designed in 2013, the first generation of vessels were made in marble and engineered stone. The material palette has grown and now the line includes 3 wood versions as well as a design in steel called Folded Vessel for Good Thing.

Out of Production Variants

A Third Eye Vessel in White Marble can be seen in the office of the fictional character Bobby Axelrod in the Showtime series "Billions". 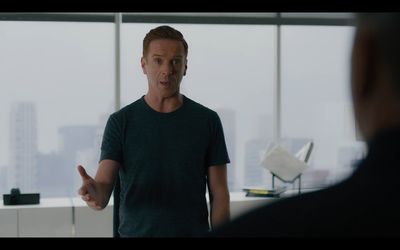 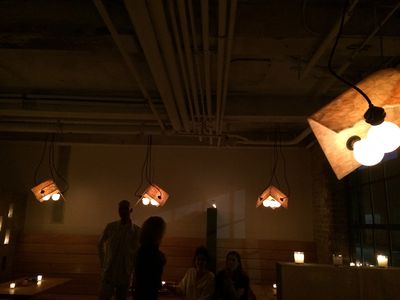 The first batch of Third Eye Vessels shown during Design Week 2013 at Creatures of Comfort.

The marble vessel is made from 1/2 inch thick marble tile. Tile allows for the sourcing of the thinest stone which gives the vessel its sense of delicacy. The decision to leave the tiles perfectly square (12 x 12 inch) instead of cutting one side was made to bring attention to the lapping construction of the 3 pieces of stone (each corner is offset rather than flush). Stone colors are selected based on their structural stability, many available varieties of tile are meant only to be applied to a substrate and not in free space. The black stone with the trade name Michelangelo, is pushing the limits of structural integrity and each piece is inspected and any possible fissures are impregnated with Hxtal resin.

The stone pieces are adhered together with West Systems epoxy resin thickened with colloidal silica and tinted with pigments to match each stone color. The glue-up occurs clamped in a plywood box to ensure squareness and each vessel cures for 24 hours inside this "mold". This is the reason production happens in the studio as stone fabricators are understandably unable to spend 24 hours gluing each vessel. Industry standard "knife grade" epoxies which cure in a few hours are inadequate for long term adhesion and the failure of many produced by fabricators in 2014 and 2015 resulted in the production being brought back in studio.

Each vessel is then hand polished.

The original steel stands (2013) were also made in studio, subsequent stands are produced in California.