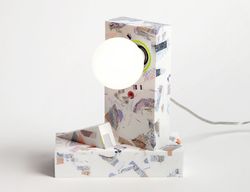 Gingko Lights were three unique pieces made in 2012 as an early exploration of what could be made with the newly invented resin composite material. The name refers to the quarter circle pattern seen in the majority of the surface. This is the first use of precast, geometric elements in the resin composites as an organizing structure to create a depth of pattern that could be revealed as the viewer got closer to the piece.

Scale in patterning had been something the studio became concerned with as they began making small objects from architectural materials. The realization was made that these materials were extremely beautiful on a small scale but in an architectural context the pattern became visual static and invisible to the viewer. As the studio scaled their resin work up in size, the lesson learned from working in the other direction was ever present.