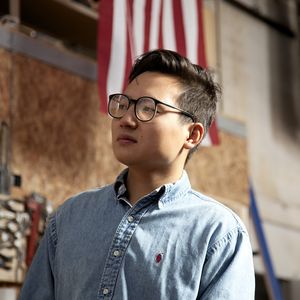 Born in Shanghai, China, Chen came to the United States in 1991 where he lived in Laramie, Wyoming for 4 years while his father studied chemistry at The University of Wyoming. In 1995 his family immigrated to Toronto, Canada where they lived in the North York borough before moving back to the United States and settling in River Edge, New Jersey in 2001.

Chen graduated from The Pratt Institute in Brooklyn, USA with a bachelor's degree in industrial design. He also studied abroad at the Gerrit Rietveld Academie in Amsterdam, The Netherlands.

From 2007 - 2011 Chen worked at the design store and gallery Moss where he worked with Murray Moss on how objects were to be composed and installed.

While at Moss, Chen had a small studio near where Kai Williams had a CNC fabrication shop and would often go there to use the larger machinery. During these visits talk began about working on some collaborative projects which eventually resulted in the two starting a design studio together.