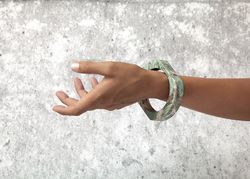 Stone Age Bangles were a series of marble, granite and engineered stone bracelets that were produced when it was realized that although jade is commonly used for jewelry, most other stones are not.

This project became a lesson on how scale impacts pattern which went on to inform many other projects. Here patterns which were normally seen at an architectural scale were taken down to an extremely small scale. Large dramatic veins, which are valued in marble slabs, became unusable. Instead, small, homogenous patterns, common in engineered tiles for more lo-brow environments worked very well and allowed the viewer to appreciate the beauty of these everyday materials.

These stones were not suitable for production.