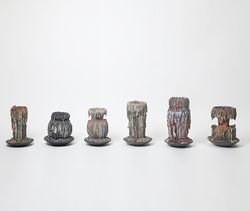 Moonmilk Vases were made in an edition of 6 unique pieces in 2014. They are made through a process of layering fast setting cement drips. As the wet cement travels over the previous dry layer, water is pulled out of the wet drip and helps slow its movement and freeze its shape. It is a process similar to the way stalactites and stalagmites are formed in caves. The name "Moonmilk" comes from a type of cave structure.

This cement layering process came as an method to save the small bit of left over cement that would remain at the end of casting each batch of Stone Fruit Planters. When mixing a batch of cement for casting planters, a little excess is always made to avoid running out. Rather than discarding this excess, it was poured out onto a surface and slowly built upon. The first Moonmilk vase was an extra large version that was shown in the Museum of Art and Design in New York. During the run of the exhibition, Stone Fruit Planters were for sale at the museum gift shop while the waste material from their production was elevated on a pedestal in the museum.