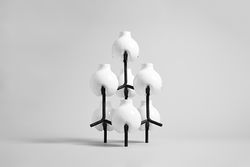 Bulb Vase was shown at Collective Design Fair as part of the 'Vanguard Series' partnership with OTHR, a 3D printing product manufacturer.

A modular system of vessels and scaffolding was designed to overcome the size limitations of a 3D printer's build chamber dimensions. This size limitation is similar to the production limitations of Dutch ceramic production in the 1700's when the maximum fireable size caused the Tulip Pyramids to be made in stacking sections. The Dutch had taken Chinese blue and white ceramics and made something idiosyncratically original, this vase further translates that idea for contemporary production.