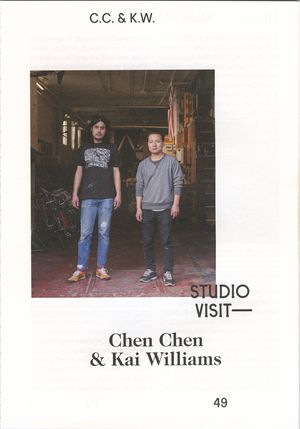 13 Greenpoint Avenue in the Greenpoint neighborhood of Brooklyn was the location of a CNC fabrication shop run by Kai Williams from 2009-2011. In 2011 Chen Chen moved into the space and the two began making collaborative works there and eventually forming Chen Chen & Kai Williams, the name of the company remaining just their names reflects the origin of it as two people collaborating.

The studio existed on the first floor of the two story building until December 2013. In January of 2014 the studio was relocated to its current location of 169 54th Street in the Sunset Park neighborhood of Brooklyn.